Bayit builds and curates tools for spiritual life. Some of those tools are new liturgies to meet the needs of this moment. Some are new spiritual practices. Some are new books. And some are games! Play is an important part of spiritual life, and gameplay can be thoughtful, contemplative, inspiring, and more. Here are the first offerings from Bayit Games. (The newest offering is always at the top.)

Chad Gadya gamified! No winners or losers (except the goat), just an extra layer of fun to the song.

On the surface, Chad Gadya appears to be nothing so much as a simple folk tune or nursery rhyme. But like so many folk tunes and nursery rhymes, the odd imagery in this song seemingly about a baby goat bought with two coins likely has deeper meaning.

While we enjoy the fun singing after seder dinner, this isn’t only an amusing pirate shanty to be sung with a glass of wine in hand.

Best played while singing Chad Gadya while standing in a circle AWAY from the table.

(If you’ve ever played the game Happy Salmon, you’ll recognize this as a seder-appropriate twist on that game mechanic.) These cards’ images are compatible with singing in any language.

On the surface, Chad Gadya appears to be nothing so much as a simple folk tune or nursery rhyme. But like so many folk tunes and nursery rhymes, the odd imagery in this song seemingly about a baby goat bought with two coins likely has deeper meaning.

While we enjoy the fun singing after seder dinner, this isn’t only an amusing pirate shanty to be sung with a glass of wine in hand.

Use this expansion pack alone or with the Chad Gadya – ONE Zuzim edition to add some fun and spirit to your seder. Divide the cards evenly among participants and start singing, with people holding up the right cards at the right time.

A set of tiles that tell everyone “you are here” in the progress of the seder.

When I was a young adult leading seder, my father (z”l) would gently poke at me by continually asking “When is dinner?” to which I replied “Not yet.” Eventiually I made a poster of the order of the seder, gave him stickers and the responsibility to add stickers as we completed sections of the seder.

We offer a 21st century version of my father’s poster with this set of hexagon tiles, with each tile containing one step of the Passover seder. Wind them around the tzimmes and past the brisket dishes. Use the salt shaker as a game piece.

These beautiful tiles will add color to the table (beyond the red wine stains) and open opportunities for deeper conversations.

These tiles can be used in conjunction with the Seder Plate Reboot, also from Bayit Games. If you’re looking for ideas on how to use them, here’s a post at Builders Blog: Introducing Kadesh Urchatz.

A seder plate doesn’t need to take up so much space on the table.

Creators Steve Silbert and Mary Walter write: Why does a seder plate take up so much space on the table? No reason is given. Mishnah Pesachim is commonly thought to contain the seder plate origins by referring to a “tray” to contain the paschal sacrifice. In 16th century Europe, artisans began making seder plates of the symbolic foods. Some of these plates were intended to hold those foods; others may have had a more general Passover use. 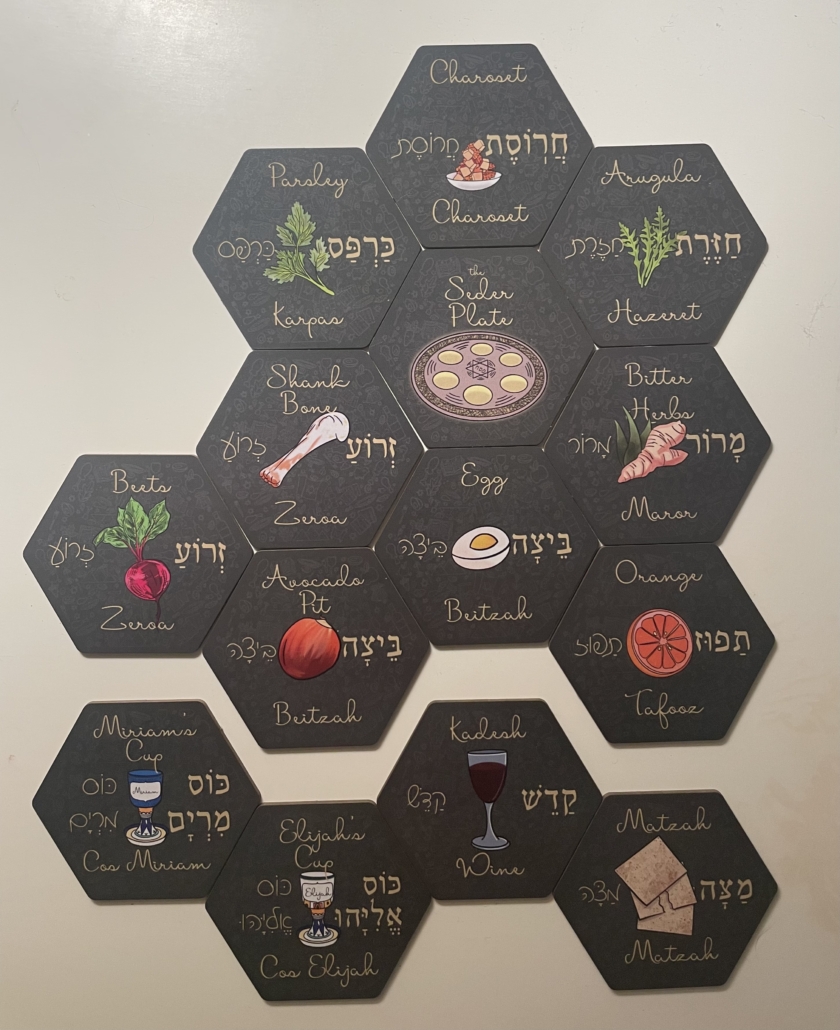 We wanted to find a way to display the seder symbols on the table while honoring the place that the brisket and Bubbie’s tzimmes have on the table. We also wanted something both configurable and portable (for that journey in the desert). What we came up with is a Seder Plate Reboot!

This rebooted seder plate consists of hexagonal, non food-grade cardboard tiles for all of the traditional seder plate symbols. On the card backs is something you may not know about that symbol.

If you’re looking for suggestions for how to use them, and thoughts on how this tangible object can help us make the story real, here’s a post on Builders Blog: Introducing the Seder Plate Reboot. 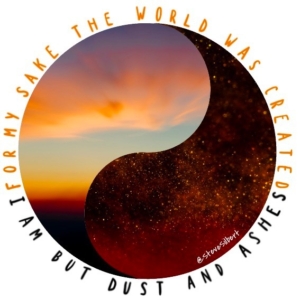 Rabbi Simcha Bunim of Peshischa carried two slips of paper in his pockets.

When feeling discouraged or disconsolate, he would reach into his right pocket, and there find the words: “For my sake was the world created.” (BT Sanhedrin 37a:16)

But when feeling high and mighty he would reach into his left pocket, and find the words: “I am but dust and ashes.” (Genesis 18:27)

R’ Simcha teaches that life is a balancing act. We are dust, and we are irreplaceable. We live in the spectrum between these two perspectives. The challenge is to be aware of both while not letting one become dominant.

Each card in this set contains the phrases “For my sake the world was created” and “I am but dust and ashes” on the front and a version of this teaching on the back. There are seven color-themed cards corresponding to the colors in the rainbow and seven copies of each making this a set of forty-nine portable, engaging and self-contained teachings.

These cards are perfect as a handout during the High Holidays or at any other learning or introspective occasion.

Find inspiration in every parasha.

The Torah is an amazing text bursting with visual metaphors. Every tiny detail of the Torah has significance and multiple meanings that can only be found by looking at Torah through a figurative microscope.

I struggle with Torah, so my passion has become to distill the multi-faceted complexity of Torah into simple images from my heart.

This deck contains a card for each Torah portion (parasha or parsha) containing a single verse on one side and an image of my interpretation of that verse on the other side.

Calling us to presence.

The burning bush on three sides, Hineni (Here I am) on the other three sides.

Hebrew is filled with words that don’t translate simply into English. Hineni is one of those words. Saying “Hineni” doesn’t simply mean, “I’m here” the way a student responds to a teacher at roll call. Hineni means, “I am here for you fully, with the trust and vulnerability to do whatever it is you ask of me.”

The safety to be vulnerable is an important part of any relationship. How you show up matters, both to you and the others with which you are in a relationship.

Whether your relationship is with God or with another person, carry this die with you as a reminder to be fully present with trust and vulnerability, ready do do whatever is asked.

At the intersection of spiritual life and game design…

The Graceful Living deck is a tool for spiritual life designed by Steve Silbert and featuring teachings distilled from Rabbi Mike Moskowitz’s Graceful Masculinity, a volume of Torah essays that draws on a wide range of classical Jewish teachings in service of creating a society where all gender expressions are understood as reflections of the Divine.

Each card features a verse from a different parsha (Torah portion) and a teaching rooted in that verse, alongside a character-development focus. These are playing cards with a spiritual twist, since each card also features a teaching or opportunity for reflection.

They can also be used in other ways, including meditation, teaching and learning, drawing a card before Shabbat dinner to spark conversation at the table, drawing a card during prayer time and reflecting on its resonance, etc.

If you’re looking for suggestions for how to use them in teaching, in learning, in spiritual life, in gameplay, and more, check out this post on Builders Blog: Introducing the Graceful Living deck!