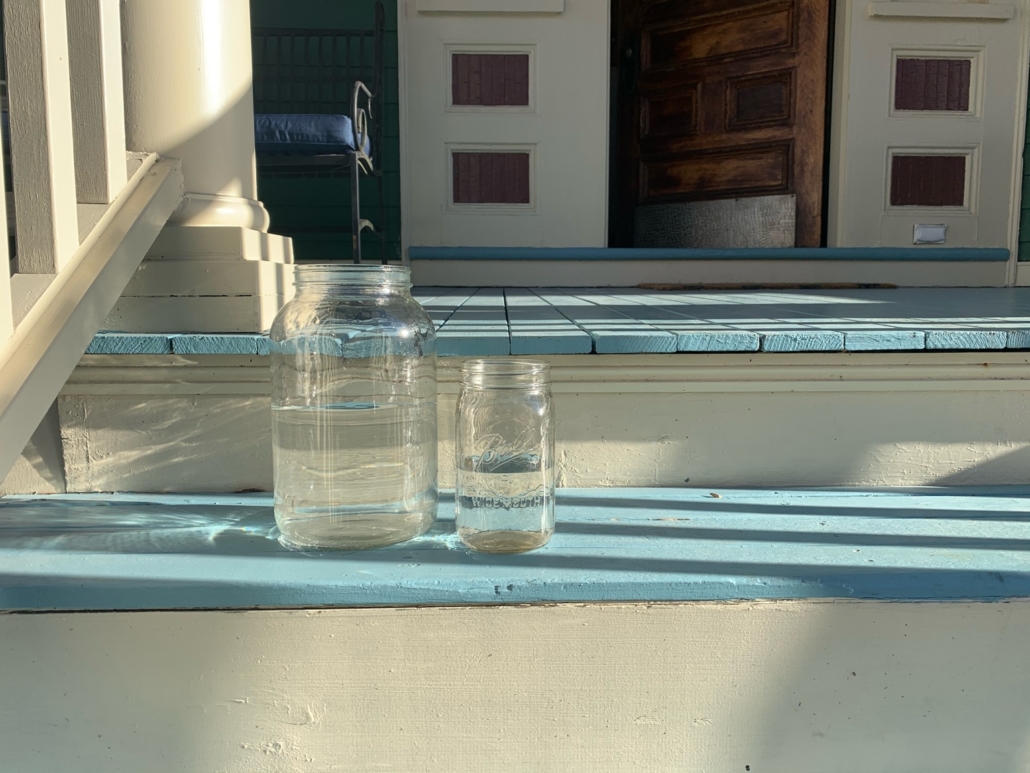 Walking home, holding hands, skipping along the sidewalk.  There were jars of water on the stoop as we approached our apartment house.  I looked up at my mommy and asked, “who died?”

Growing up in Brooklyn in the 60s and 70s, in a co-op apartment, there were often jars. Mourners returning from the cemetery wanted to symbolically wash that dirt and energy off before entering the building, with just a hearty dash over each hand.  Co-ops are very New York:  you buy shares in a corporation, so you own your apartment, more or less.  It makes for stability and a sense of shared community.  Our building, and those around us, held a large contingent of Jewish families.

With 48 families in our building, and 48 more in the building behind us where my grandparents lived, and 48 across the street where my cousin lived, there were jars.  After the jars came the shiva calls.  A small child could usually find some excellent cake or cookies.  A slightly older child might be asked to take out the garbage (to the chute in the hallway) or to put dishes in the sink.  A slightly older child might have a coffee, or a glass of wine on the sly.  If you were lucky, some other kid or cousin would be stuck making a shiva call at the same time.  Perhaps you could even sneak out to play after a suitable interval.  Shiva calls were non-negotiable. We were going.

Aside from the jars, there was the knock on the door.  Someone was collecting money to bring in food for the shiva.  Someone was coordinating the chicken for Tuesday, the deli for Wednesday, the platters coming from the bereaved person’s office, and onwards.  If you knew who was grieving, you had a pretty good chance of guessing who would be knocking.  If you missed the knock, you could go find that person.  Her name (always a woman) was listed on the death notice posted above the mailboxes.  It all ran like clockwork.  Was there a chairwoman of the jars?  Was it a race to get the jars out early and claim the unofficial mitzvah?  The jars were always there when they were required.

When we buried my grandma, I lived in a private house.  It dawned on me to put out my own jars before we left for the cemetery, because lunch after was at my place.  When we buried my dad, I have no idea what happened or who put out the jars.  Probably it was the friend who was at my house starting the big coffee pot and laying out the food.  My memories of that day are kind of swirly, but I do remember pouring water over my mom’s hands, and my children’s.

My building now is much more diverse, although still with a number of Jewish households of varied background.  Once so far (in 9 years), I put jars out for a neighbor.  The mourners were so touched by the gesture and thanked me repeatedly, which felt so strange for such a small thing.  Now, sometimes I don’t find out until after the fact; sometimes there is no notice by the mailbox.  Nobody knocks on my door.

Yesterday, we buried a fellow congregant.  She was nearing 100 years old; she died at home, peacefully and surrounded by love.  Family members spoke so warmly, as our minyan spread out with our masks on.  She was a remarkable woman, truly. The rest of the congregation, family and friends attended via zoom, broadcast by an iPad on a tripod, deployed by the funeral director.  No shovels are allowed in a pandemic; we buried her with plastic cups full of dirt, or handfuls, until we blanketed her plain pine box.  We formed two lines for the mourners to pass through.  We schmoozed at a safe social distance on the way back to the cars.

It was there that I learned that our service had been zoom-bombed by anti-Semites.  Someone zooming at home had to call the funeral director to eject people from the meeting.  I won’t tell you how ugly it was.  But it was very ugly.

So somebody used their time and energy to find a link to a zoom funeral, solely for the purpose of adding more trauma to it.  Who is that person?  How do I see the spark of God in that person’s soul? Or should I even bother to try?  How can peace rain down on us with that person holding such hate?

A friend and I both stopped at the gates of the cemetery, to wash in the spigot there (often there is one if you look).  No jars, but I turned the garden-hose-style knob for her as she washed, and I washed. This time, though, I had something new to wash off.  So far, it has not left me.

Two Practices After A Zoom-Bombing

While washing hands at a sink, or while taking a hot shower:

May this water wash away the residue of hatred.

May this water cleanse my hands and soothe my heart.

May this water protect me like the waters of the womb before I was born.

May this water be my mikvah, connecting me with hope.

While inhaling a sweet scent: havdalah spices, a cinnamon stick, a sprig of herbs, even a teabag:

Breathing in, I take in the scent of Shechinah.

I ground myself in this place, and in The Place we call God. I am safe.

Breathing out, I let go of rage and anxiety.

I commit my hands and heart to building a better world.